A downloadable game for Windows and macOS 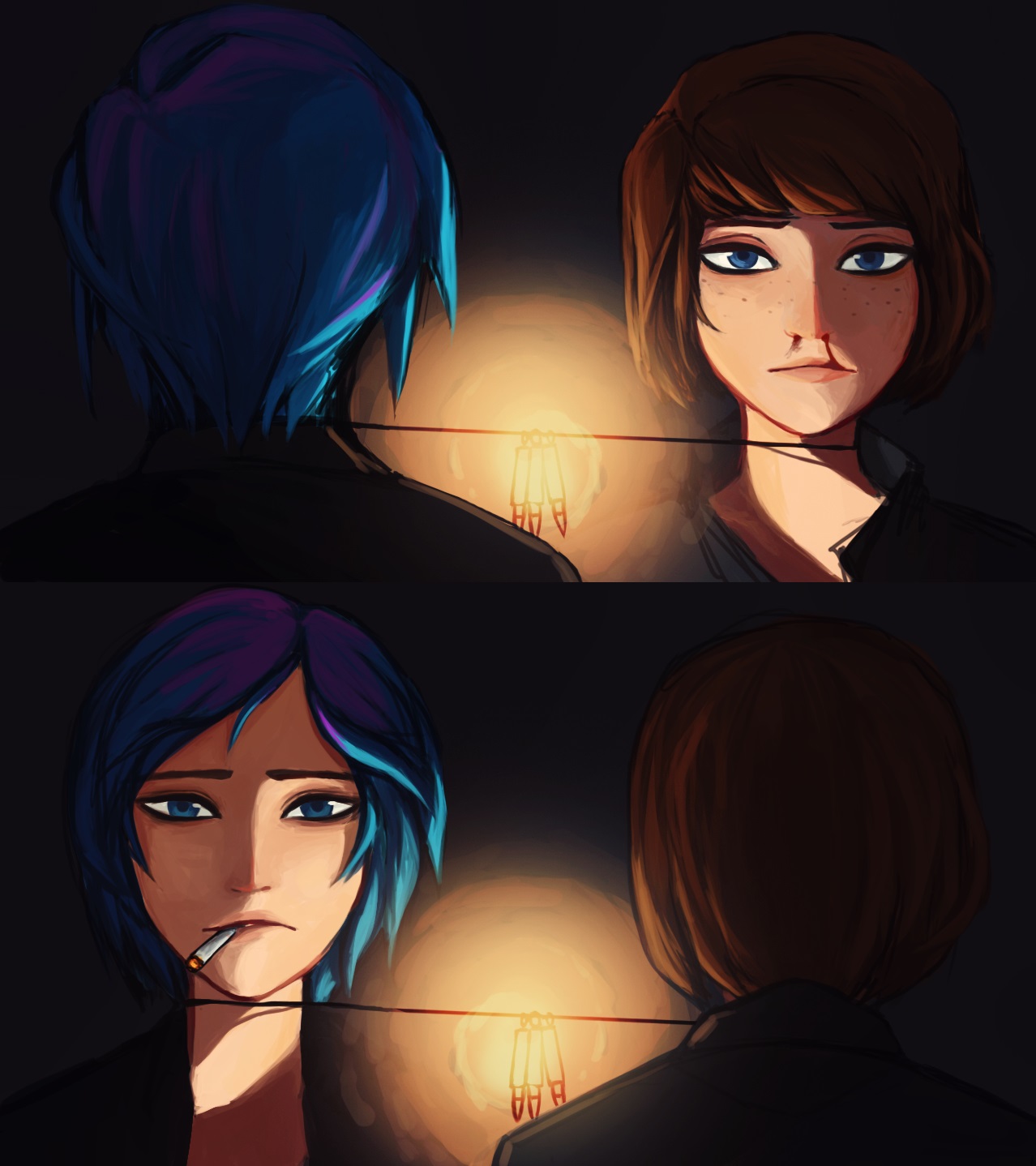 A Song of Time and Storms

(built with Renpy); (all art featured was made for this project)

THIS IS A FAN SEQUEL TO LIFE IS STRANGE.
PLEASE MAKE SURE YOU HAVE EXPERIENCED IT BEFORE THIS PROJECT, AS IT PICKS UP RIGHT WHERE THE ORIGINAL GAME ENDS.
THIS WORK CONTAINS ROWDY LANGUAGE AND ADULT THEMES
(but NO nudity or explicit sexual content)

Characters/copyright belong to DontNod/Square-Enix.
This is a derivative fan-project, freely available to the public, made out of passion for PriceField. This project is in no way affiliated with the developer or publisher of the original title. 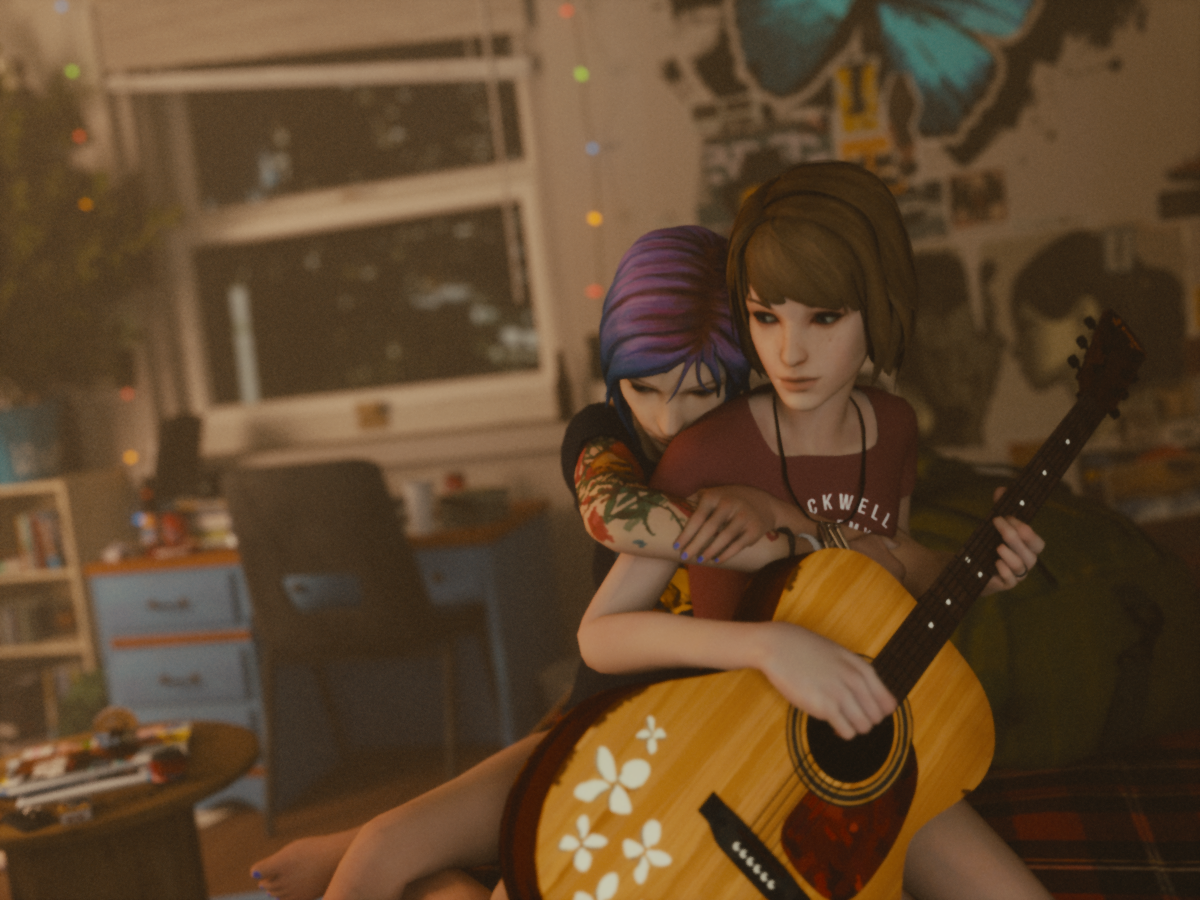 "Knowing you, day to day, this is love."

Life is Strange: All Wounds is a fan-made sequel story to the original season of Life is Strange, ie the Max/Chloe story arc developed by DontNod. Using one of the game's two endings as a starting point, it is a very personal and exploratory narrative about these two women, having reconnected through such traumatizing events, learning how to lean into each-other to support one another in a relationship, building romance on top of their long-lasting friendship while trying to find ways to cope and heal through everything they've endured. Eventually bringing Stella, Brooke, and Victoria in as supporting characters, All Wounds eventually explores a theoretical future with Max and Chloe confronting and accepting things about their decisions they regret. (yes, a happy ending, but not a fluffy one) 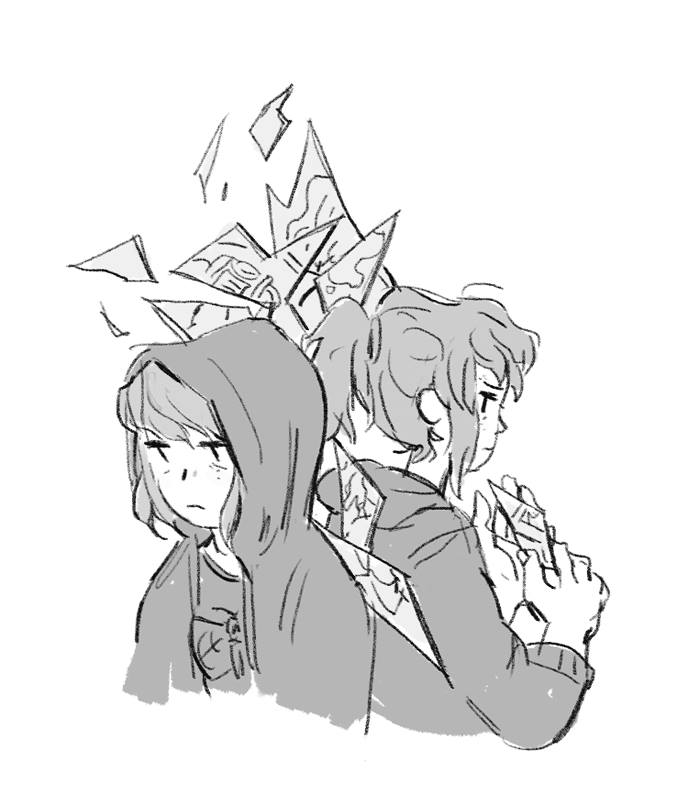 “This is where we get into trouble. You're meant to know only as much as you can handle. When you wander outside of your realm is when we end up fighting.”

The story goes to some dark places, as a head's up (honestly, I think I should probably tone down Chapter 1 a bit in this regard, it's almost a bit too much reiterating trauma all at once? Though the idea was to make the reader feel as overwhelmed and tired as Max does directly after such a week). But the end-goal here is to put these characters through the exhausting paces of coping with depression, survivor's guilt, regret, PTSD, loss...but ultimately, healing. And to be clear, this is definitely a story interpreting Max and Chloe as a romantic couple, they WILL be dating not far into the story, and a lot of the early-game conflict comes from the complications of accepting those feelings and pursuing them in the face of the week they have endured and the choices they have made. And it does have a happy ending that they earn together (with some help!). 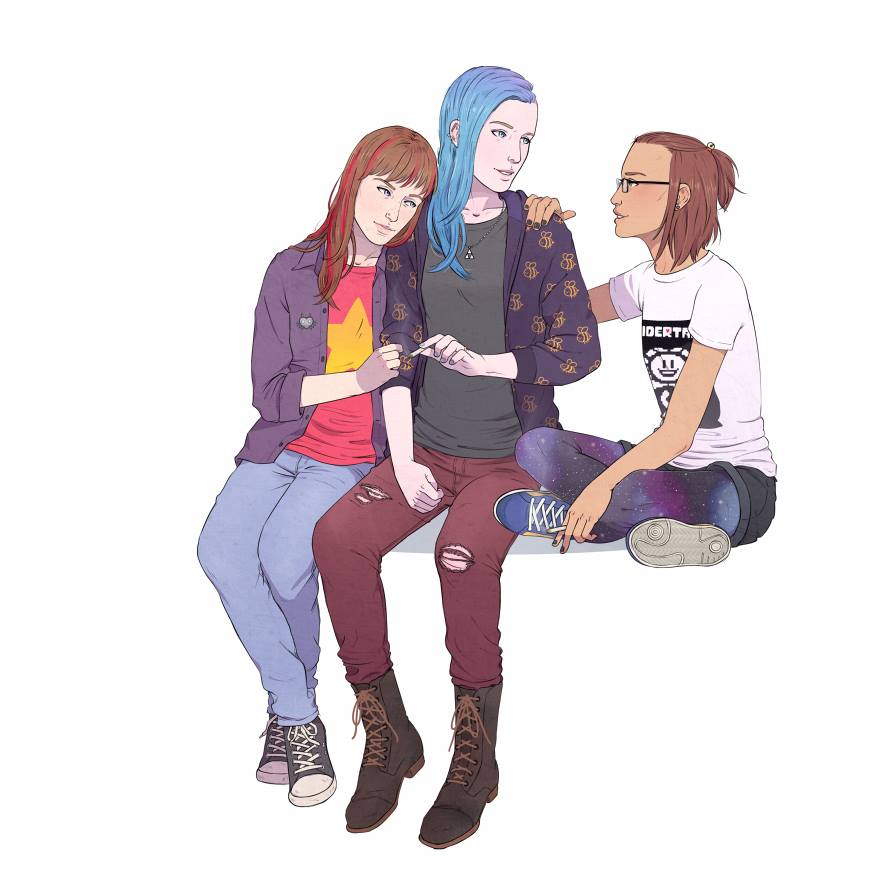 As a visual novel, the story will swap perspectives between Max and Chloe each chapter, with the narration shifting styles as well as allowing choices to be made from both characters' points of view. While the main plot has a fixed purpose and direction, the ultimate climax resolution of the story is planned to have a few different ways of coming together, and at the very least I want to provide not just alternate dialogue but instances of completely different scenes depending on certain choices or combinations of choices. 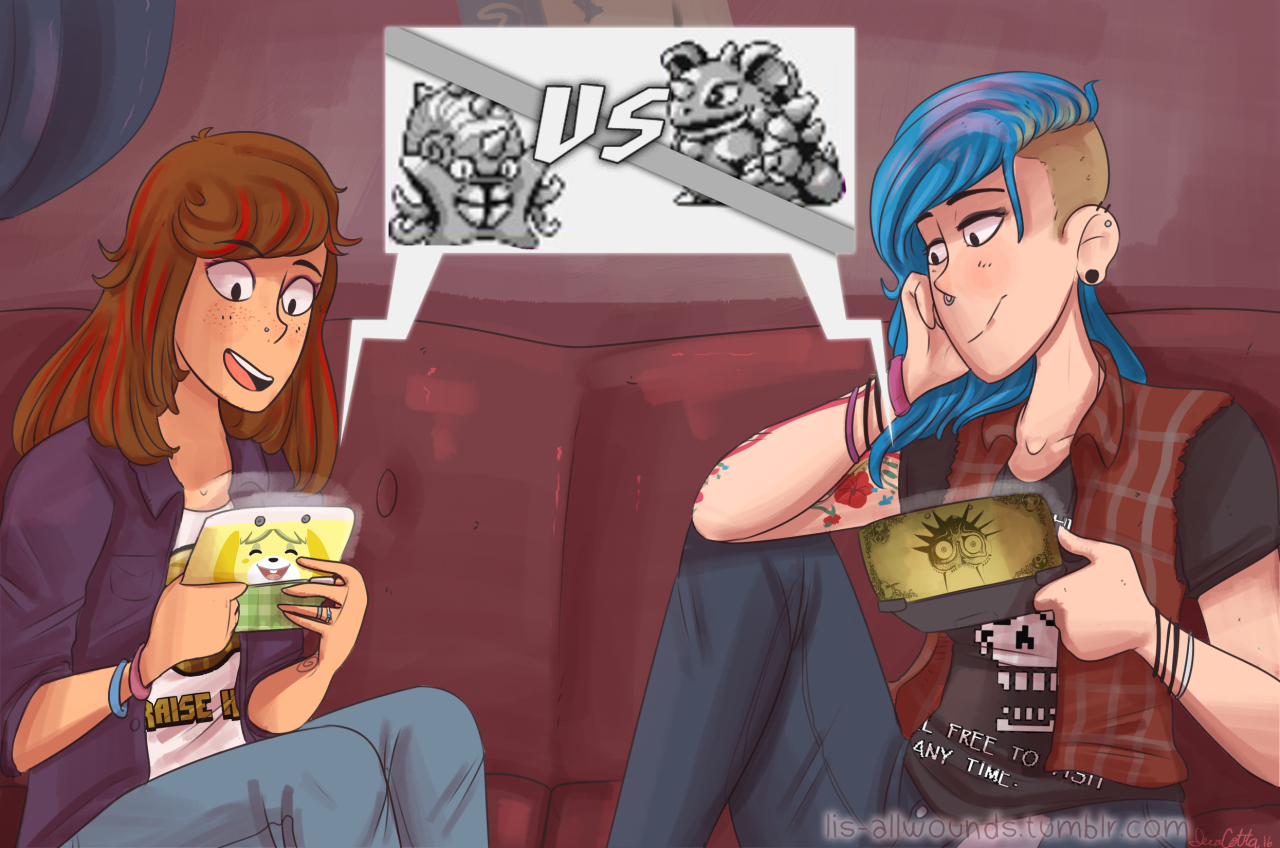 “Whoa, when did you evolve your Nidorina?”
“When you weren’t lookin’. Yea, yea, ya like that Body Slam?”
“Body Slam’s got nothin’ on Lord Helix.”
“QUEENS are better than LORDS, Maxie.”
“What’s a Queen to a GOD?”

This build contains the first two fully functioning (though subject to change) chapters of the story. In prose format, the 20 chapter narrative is complete, and can be read on AO3 and FF.net. With the visual novel's draft text finally written out, I have been adapting it all to renpy, and am gradually working my way through and coding in choices, alternate dialogue/scenes, etc. So it will ultimately end up having noticeably more content than even the fic, if I can pull this whole thing off properly.

A gallery featuring artwork made for this visual novel can be seen here.

Any donations made will be put back into commissioning artwork for this project (primarily, character sprites). You can donate directly through PayPal if you wish. There's also Ko-Fi. Alternately, I have a joint Patreon with my fiance, mollifiable, for our writing/art/video content, though eventually I plan to post updated builds for this project there.

You can follow updates for this project over here.

Thanks for your time! Any and all support is greatly appreciated. 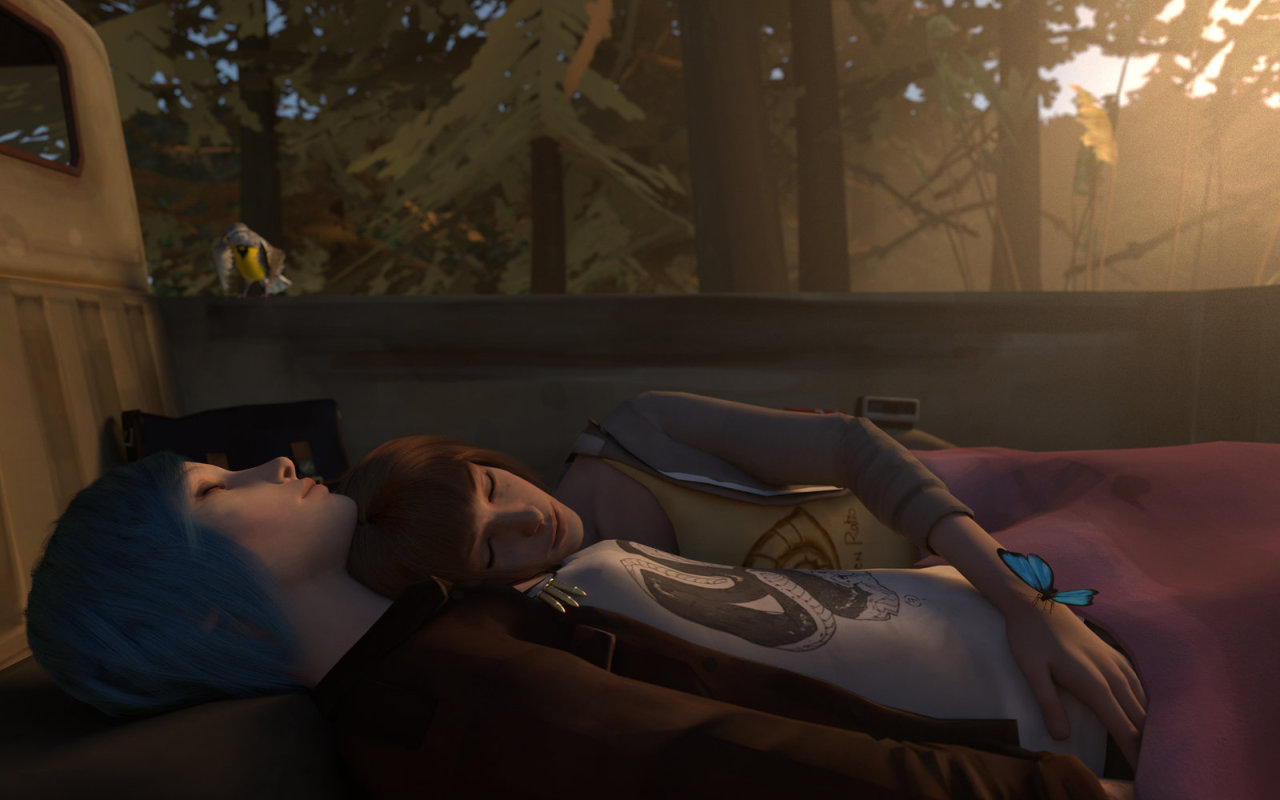 Credits for assets used in this build are contained within the attached README file.

- This build is over a year old; this project has been in development since November 2015.
- I commission various artists across the fandom for different scenes (or ask permission to use certain artworks)
- The current sprites being used were commissioned from Shannon Ehrola; however, the final product will ideally shift art styles for thematic purposes after a certain point in the story, as reflected in the title screen, by mollifiable
- There's a "tutorial" but it's really more of a weird tongue-in-cheek thing; you can click the 'Help' button in the menu at any time to pull up Renpy's built-in controls
- I've gotten a lot of conflicting takes on how to approach this, that, or the other, but any and all feedback is still appreciated

- One feature I'm now considering working in is some way to retroactively incorporate meaningful choices from the first game: Kate's fate being the primary example. All Wounds was originally very specifically based on my first playthrough and intended to function as a "single possible timeline" (with multiple timelines being just a plot device going on), but we'll see!

a  Beautiful story for the beautiful   Characters we came to  love i hope we get to see them again but all good things most end so sorry ive been posting  alot just  Huge fan of your work   , i hope Square enix picks up  to make another Max and Chloe story  but this  Filled the void  of the hole in the story left us so just want to say thank u  Destiny smasher for story that  you  Told us it was beautiful thank you

how far is the game  and the codeing

Chapters 1 and 2 are more or less finished (which is what the current public build contains). I have converted over 300,000 words of prose into code format and am working my way through that, adding in choices and alternate dialogue, etc. It will be a while until the story is finished but I to release an updated build with substantially more content at a later date.

you deserve free cake for the rest of your life. That's how good this game is.

also, is the game finished or do you count on making more chapters?

Ha, thanks. A free cake would be nice, but honestly, what I really need is work. >_>; I'm unemployed and after months of searching I'm at an utter loss of what to do.

I have actually coded quite a lot of text into this program, 20 chapters worth -- the story is already written as a fic, and it's taken me months to convert it over. Now, I'm gradually working on coding choices, branching conversations, alternate dialogue, etc. (Chapters 1 and 2 are very basic but I'd like certain chapters further in to branch into more complex things, even alternate scenes entirely, though the main plot still has a linear progression)

It's still a LONG ways to go, but if I can pull it off, will be quite a substantial piece and a very thorough send-off I can personally give to these characters. Thanks a lot for giving this a try! I hope you come back some day when I have more ready, or if you decide to read the fic in the meantime, I hope you enjoy that, too.

Fantastic Game! So much Details! Played Chapter 1 in an Hour or about 40 Minutes. Love it! Other Max is Pissing me off TBH.

Haha, yep -- I wanted to capture the same feeling from Episode 5 during the Nightmare. In this story, my interpretation is that Other Max actually is the "architect" of that Nightmare, and how/why is a pretty important aspect of the plot as you get into things. Thank you for giving this a try! I'm glad you were able to get it working finally! I hope you enjoy Chapter 2, and if you want to read the fic version while the visual novel is in development, that is already finished!

Hm, looks like it's working here. Are you trying to download the Linix or Mac versions from Google Drive?

Another Problem. When i try to launch it it fails and says this:

An error occurred while launching Life is Strange: All Wounds

Any Solutions? I tried Re-Installing.

Again, I don't know which version you are trying to use. ^^;; You may want to look the error up regarding Renpy, that's all I can think of, sorry. This version has been around for a year. If you can provide me with a log of the full error I could try and find out what happened. Where were you in the story when the error occurred?

Hey, read your error, and you're right, it's too long. xD But you still haven't explained -- what operating system are you using? Are you on Windows? Have you already downloaded and used Renpy before? It's looking like the error may be tied to something called "Zsync" seems like it may be the issue, but that appears to be a Linux program? And you're trying to play the Windows version? (I have a link for a Linux version on the page here, near the bottom). That's my best guess, anyway. No one else has reported this error despite the demo being out for a year now, so I don't really know what the problem could be if you are running it on Windows. You are using the correct .exe to open it right?

I'm using Windows 10 64x Bit. And yeah im using the right .exe to open it. No i haven't used Renpy Before.  And i don't know what Zsynic is.

Edit: Tried Clicking the .EXE In the folder and it just dosen't open. It adds in a games list in my Gaming application without it running.

No worries! I guess that makes sense, I've never made the program available through a source like this before. I'm just glad you got it to work! 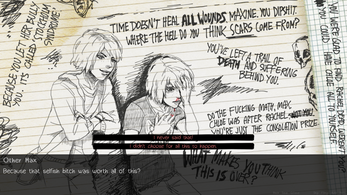 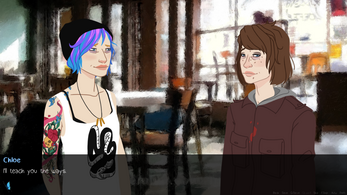 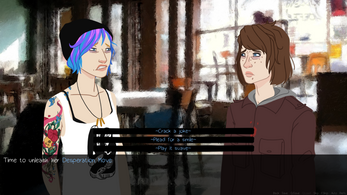 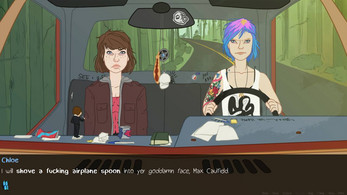 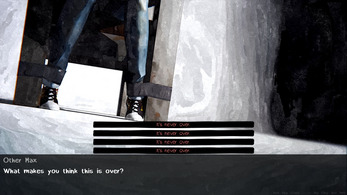